Angie’s List has always been a popular directory for home service professionals. Roofers can benefit from a listing on Angie’s List website. Because the brand is so reputable with homeowners there is a level of trust associated with listings on its platform. In 2019 however, most people check Google My Business before anything else. Next would be Facebook and Yelp. The reality is that Angie’s List is only used by people already familiar with the brand which is probably less than 25% of your future clients. Still, that is enough of a number to make a citation listing worth having on the website. Roofers should familiarize themselves with SEO guidelines for 2019. 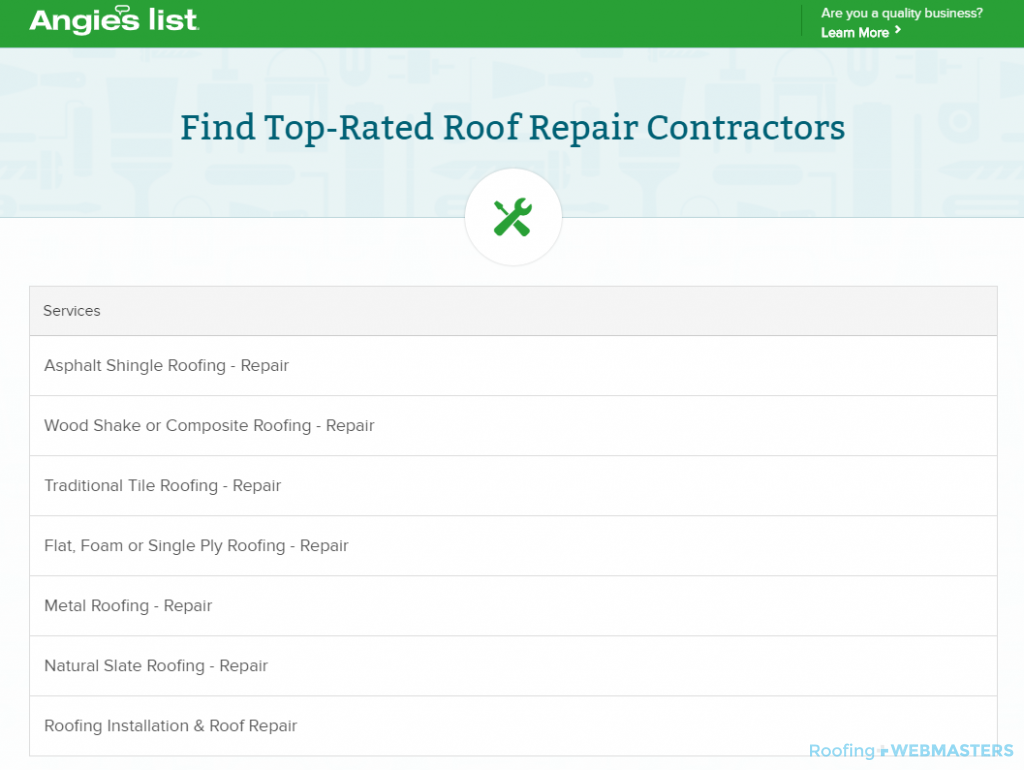 Certain online listing sources are known as “niche” directories which means they have increased value for businesses in certain industries. Angie’s List, for example, is a niche directory for roofers and home service professionals in general. The site is founded on the concept of review sharing among homeowners. Its objective is to match qualified home service workers, roofers in this case, with homeowners in need. Advantages to an Angie’s List citation include:

Angie’s List is more valuable to roofers than a restaurant owner, for example. A hungry consumer is more likely to check Yelp to gauge a restaurant’s reputation, while a homeowner suffering from a roof leak will probably jump on Angie’s List first. Ideally, your visibility will expand across multiple directories, including Google My Business and HomeAdvisor.

It’s a question we get somewhat frequently from contractors in the industry. Noting the connection between NAP listing optimization and sales conversions is an important occurrence for roofers. Once they make that connection, the concept of Angie’s List clicks for them. Local SEO relies, in part, on the verifiable existence of reputable citation sources. Local search visibility leads to relevant traffic, which leads to lead generation, and so forth. So in short, yes, you do need it. And here’s why:

If you fail to optimize your Angie’s List profile, there is no penalty, no automatic loss of rankings, nothing of that nature. But what it represents is a lost opportunity to improve. There’s a school of thought that if you’re not getting better, you’re getting worse. This philosophy is particularly poignant in online marketing, as the landscape is always evolving and rewarding those who keep pace with its evolution. Roofing Webmasters will ensure your company is ahead of the curve, not just with listings optimization, but elsewhere too.

Angie’s List, like other NAP listings, whether it’s Google My Business or Yelp, requires accuracy, consistency, and attention to detail. The name of your roofing company should be spelled how it is on your main website, and other citation sources. That means down to the letter, and punctuation. If you are Joe’s Roofing Co., be that all the time. Don’t be Joe’s Roofing Co. on Google and be Joe’s Roofing Company on Angie’s List. You will only confuse potential customers.

Business locations and phone numbers change from time to time, and when they do, you must be vigilant in updating your citations. Even if you moved one suite down in your office, a change in the physical address requires you to ensure the consistency of your listings. Don’t have the time for that? Don’t worry, Roofing Webmasters will handle it on your behalf. Our SEO experts are ready to increase your local search visibility for the long haul.

Hello! If you have any questions, leave your info below and we'll call you.